A slow change in climate - Germany’s dilemma about renewable energy 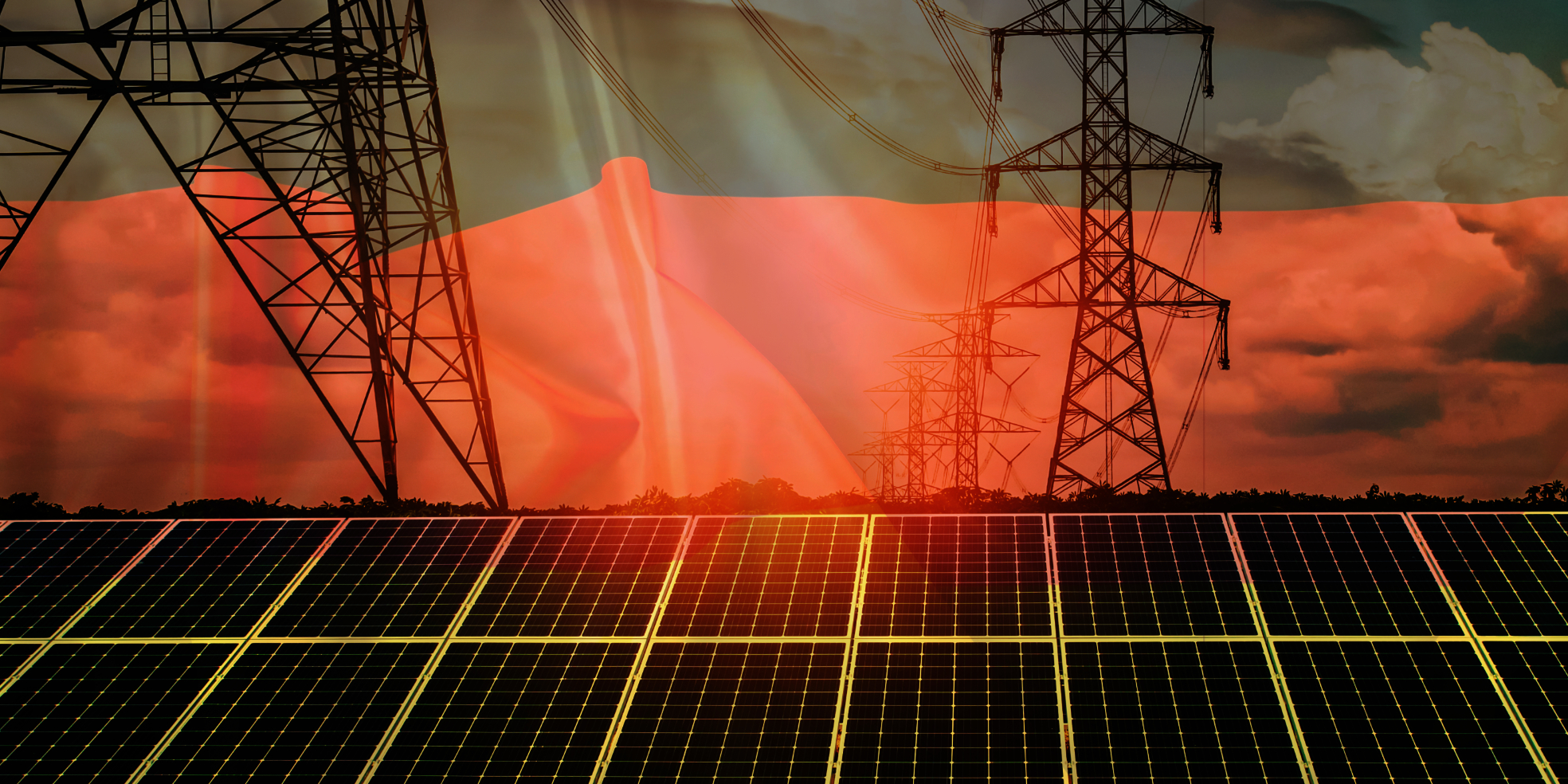 When the long-term goal is climate neutrality, many people believe that what we have to do is to create more energy saving initiatives. Sure, reduced consumption may make things easier, but in reality energy generation must be switched to renewable energy sources to get rid of harmful emissions in the long term. If we look at Germany right now, this is perfectly obvious. As demand for electricity is expected to only get higher and not lower in the years to come, the shutdown of nuclear energy plants and the fixed phase out of coal must be met by a massive move forward with renewables.

In the process of enforcing the energy transition, the new German Economy and Environment Minister Robert Habeck finds himself standing with his back against the wall, as he is facing resistance from many different sides. And this is not enough: Due to the Russian invasion of Ukraine, Germany now wants to reduce the dependence on Russian gas by switching to LNG in the short term, and it is planned for renewables to produce 100% of the required electricity by 2035, much earlier than originally planned. This requires a massive boost in green technology and to ensure that his push for the much-needed additional solar panels and wind turbines does not turn into tilting at windmills, Habeck must weigh his actions carefully, but at the same time he has to deliver soon.

Setbacks along the road

Even though Germany now has a Green Party leader in charge of bringing about the energy transition, which is considered by many as a blessing, the energy industry is currently the problem child of German politics. Looking back at 2021, the shut-down of three nuclear power plants caused a significant drop in security of supply. Also the planned grid expansion progressed only sluggishly, raising the cost for system security measures. In the last ten years, virtually no progress has been made in converting building heating away from gas and oil and also German electricity prices are now among the highest in the EU. There has even been a recent decline in renewables in the electricity mix, with wind farms recording the biggest slump ever in 2021. Renewables only supplied 40.5% of total electricity generation compared to 43.6% in 2020, which means a significant increase in emissions, standing in sharp contrast to the recently raised climate targets for 2030 of having a whopping 80% of electricity to come from renewable sources and 100% in 2035.

The tasks at hand are therefore incredibly demanding. On its way to net zero, Germany still has a lot of things to do, as the goals the new German government set for itself are extremely ambitious and in recent years, only a large number of small-scale measures have been implemented. For real progress to be possible, many stakeholders must pull in the same direction. To double the share of green electricity by 2030 (the goal stated in the coalition agreement), a massive and rapid expansion of wind and solar plants must ensue.

The roadmap for Habeck and the entire German economy is clear: Wind farms must replace coal-fired power plants, electric vehicles must be widespread, heat pumps must replace existing natural gas heating systems, and hydrogen must be burned in steel mills instead of coal and natural gas. Brand new in government, Habeck wants to distinguish himself as the one who has massively accelerated the pace with new climate protection packages. Renewables currently produce 240 TWh of electricity, but by 2030 must rise to up to 600 TWh to cover at least 80% of total electricity demand. The planned total addition of capacity will come from up to 110 GW by onshore wind farms, 30 GW by offshore wind turbines, and 200 GW by solar energy. Compared to the production rates of today, each sector would have to double or triple to meet this desired increase in production. For 2022, Habeck expects an addition of 3 GW of wind power onshore, 500 MW offshore and 7 GW of photovoltaic plants to be built. What is just about 10 GW per year is planned to increase steadily to 20 GW per year for the years 2027 to 2030.

At the beginning of April, Habeck doubled down on his promises and promoted an immediate ‘Energy Measures Package’ that includes new legislative initiatives that should facilitate the construction of renewables. In this new plan, the expansion of renewable energies has now officially become a "matter of national security," not only in the light of the Russian war in Ukraine but also because of the advancing climate crisis. In short, bureaucracy is to be eliminated and approval procedures should be simplified and sped up. Habeck knows that time is running out and in 2022 and the years to follow, Germany would have a hard time meeting its climate targets, if the energy transition does not move forward now. When asked, all parties involved claim to want to take part in this ambitious plan for the energy transition. Yet hardly anybody wants to make the first move. 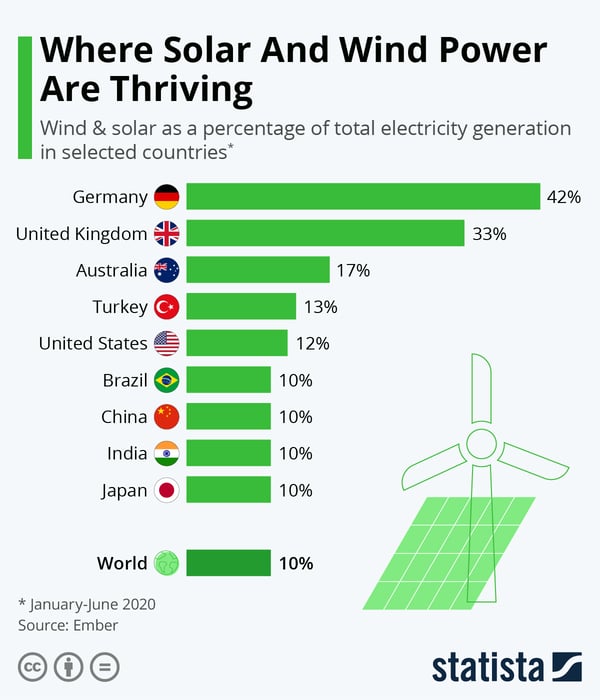 When it comes to pioneering in the respective areas, nobody seems to want to make the first move with renewables. The local authorities would need to take on the task of finding a place for solar parks and windmills, but they are reluctant to do so, as hardly anybody would agree to have either solar or windparks constructed in “their own backyard.” In the region of Bavaria for example there is a regulation that forbids the construction of a wind turbine closer than ten times its height away from residential buildings. And for now it will continue to be like this, as politicians do not want to fall out of favor with their constituents - the general attitude being “if we just pretend to be a bit stubborn, they will surely put these windmills somewhere else”.

This is incompatible with the agenda of dedicating two percent of the state's land to onshore wind energy, which should be put into law soon. Offshore wind farms are expensive to connect to the grid, so a rapid expansion of onshore wind would take pressure off the necessary modernization and expansion of the grid that would consume many more years in planning and budgeting. So far, only 2 out of 16 federal states come close to this two percent, Habeck said. The expansion of wind power will not continue without resistance and protests, but the planned new regulations are likely to ease the situation by not rewarding those who are opposed to them. Also the goal of reducing Russian gas imports should increase the public acceptance of wind power plants. Habeck himself has said that there will be heated debates with the federal states, and that it will be a tough process, but in the end, he expects everybody to be on board.

Many associations are strongly protesting the use of natural gas, not only because of the political dependencies on Russia it creates, but because the transport and burning of natural gas still causes huge amounts of CO2 and methane emissions. Excluding gas would shrink these emissions. On the other hand some experts suggest that it could be counterproductive to exclude gas, as in the end it could make the energy transition more expensive. Just a few months ago, natural gas and LNG were included in the EU taxonomy to act as a transitional energy resource, as long as renewables are not yet able to compensate for times of low electricity production. Here Habeck is also under political pressure from his voter base due to gas having been classified as sustainable (or more precisely to be transitional) in the EU taxonomy.

But promoting renewables for fighting climate change is only part of the story, as they can also be an asset for Europe's strategic goal to reach a higher degree of independence in energy supply. Ever since the developments following the Russian invasion of Ukraine in February this year, Europe's and Germany's dependence on gas in general and Russian gas in particular has moved into the spotlight. There are many plans and measures being crafted by various European institutions to get rid of this dependence, yet it may very well take at the very least a couple of years for such big changes, like the construction of two new LNG terminals to reduce Russian gas imports by two thirds in the long term. However, it is difficult to close the pipeline from Russia completely as LNG is quite bothersome and expensive to use. So the road towards 80% renewable energy by 2030 might be supported by at least some Russian gas for producing the remaining 20%.

Yet, all these plans are not taking into account a possible gas embargo. While Germany is currently opposing a general gas embargo, Russia has already stopped supplies to Finland, Poland and Bulgaria. These actions may very well just be used by Russia as a political weapon. Some experts claim that an embargo could possibly lead to a recession, but not a catastrophe, so it may be possible to prepare and mitigate the consequences by substituting Russian gas from other sources while also reducing total consumption. But at the same time, uncertainty remains, as from the European side, dependence on Russian gas cannot be completely eliminated in a hurry, even if the share has already fallen since the outbreak of the war. The European Commission is planning mandatory gas storage levels of 80% by November and then it to be 90% by 1 November 2023. Such a measure breaking with free market principles is a tell-tale sign of the high uncertainty lurking around safety of supply.

Given that there continues to be affordable gas on the market, Germany will keep on considering gas-fired power plants as a bridging technology up until 2035 to ensure security of supply after coal-fired power plants are shut down in 2030. For this, Habeck will obviously meet fierce resistance from his own Green Party voter base, but especially in the light of the new geopolitical landscape, it’s the results that matter and the way to get there can’t be blocked by clinging to ideologies. 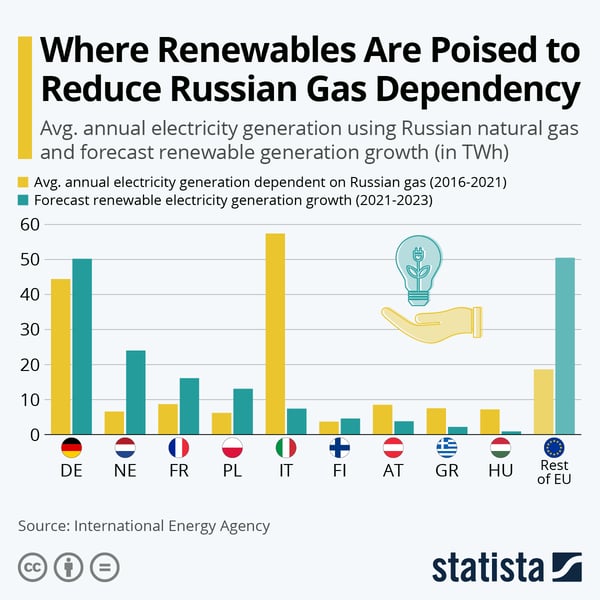 As the implementation of all measures for expanding renewable energy will have a lot of detours and delays anyway, Germany is in the right to be aiming for the moon with ambitious climate goals. The current political tensions with Russia should substantially speed up the energy transition to be fully realized in 2035. By settling for less, Germany would run the risk of not achieving a single goal. So we're curious to see whether Habeck is able to prevail and shift up a gear in the energy transition.